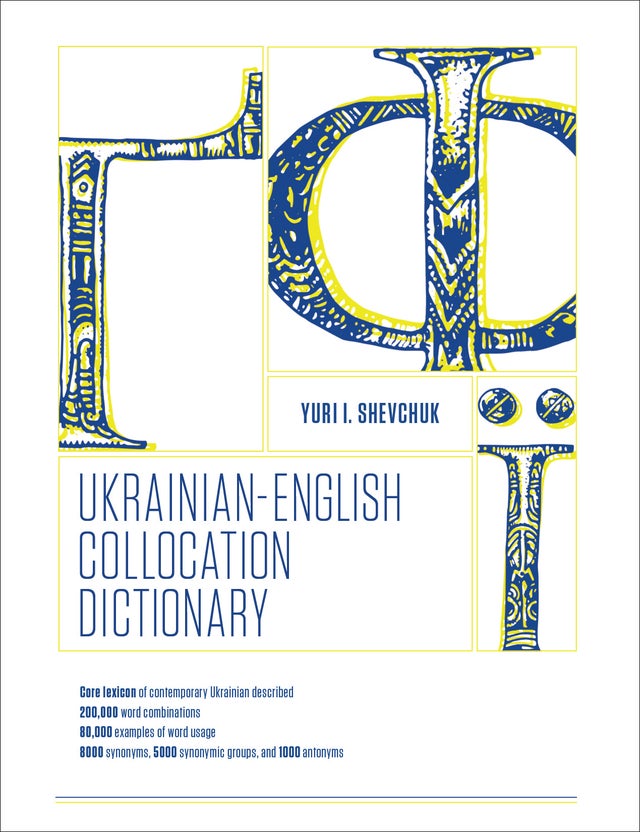 "Yuri Shevchuk's Ukrainian-English Collocation Dictionary is a highly welcome addition to Ukrainian lexicology, the first of its kind to present the most frequently found combinations of Ukrainian words in a modern setting with fluid, pitch-perfect English translations. It will be a major reference for students learning Ukrainian, for travelers, and for advanced speakers of Ukrainian, who will profit from its wide-ranging morphological, syntactic and lexical detail."

The Ukrainian-English Collocation Dictionary provides the core Ukrainian lexicon as it is used in contemporary speech. This dictionary has no precedents in Ukrainian and Slavic lexicography and combines elements of six types of dictionaries: translation, collocations, learner’s, thesaurus, phraseological and encyclopedic dictionaries.

Yuri I. Shevchuk, Ph. D., lecturer of Ukrainian at Columbia University in the City of New York since 2004, is a leading specialist in Ukrainian-English lexicography. From 1990-2012, he also taught Ukrainian at Harvard University Summer School. His published translations include George Orwell's Animal Farm, (1990, 2015) and the bestselling Orest Subtelny Ukraine a History (1991). He authored Beginner’s Ukrainian with Interactive Online Workbook (2011, 2013), a popular textbook for American college students and independent learners worldwide, also published by Hippocrene Books.