Welcome!
If you're seeking a dictionary for a less-commonly taught language,
an international cookbook, or a unique history book -- you've come to the right place!
Learn more about Hippocrene Books below. 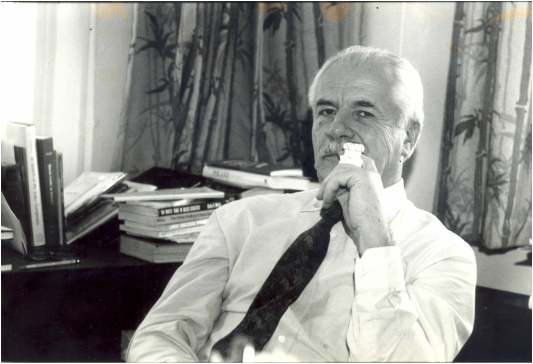 Hippocrene's founder, George Blagowidow, in his office.
For forty-eight years, Hippocrene Books has become one of America’s foremost publishers of foreign language reference books and international cookbooks. As a small publishing house in a marketplace dominated by conglomerates, Hippocrene has succeeded by continually reinventing its list while maintaining a strong international and ethnic orientation.

George Blagowidow founded the company in 1970, initially as a distribution firm called Optimum Book Marketing. In the following year the publishing side of the business came into being as Hippocrene Books. The name Hippocrene comes from Greek mythology and refers to the sacred fountain of the Muses that was the source of their inspiration.

Hippocrene’s international focus derived from Mr. Blagowidow’s passion for travel and his personal history. Born in Poland of Russian parents, he survived the Nazi occupation and narrowly escaped from communist Europe in 1945. After attending university in Antwerp, Belgium, he came to New York in 1951, where he earned master’s and doctorate degrees in business from New York University. Before starting his own publishing company, Mr. Blagowidow held executive positions at Doubleday, Macmillan, and Reader’s Digest.

In addition to being a publisher, Blagowidow was also an author, and wrote The Last Train from Berlin (Doubleday, 1977) and In Search of the Lady Lion Tamer (Harcourt Brace,1987).  Mr. Blagowidow passed away at age 90 in 2014, and the company is still held by his family.

Hippocrene’s first list, in spring 1972, featured European literary classics in translation, including the Polish novel The Doll. In 1973, it began to distribute foreign language dictionaries for the German company Langenscheidt, thereby entering what would prove to be its strongest category.

Currently, Hippocrene publishes in over 115 languages, from Arabic to Zulu. The Hippocrene Beginner’s Language Guides are excellent learning tools for both classroom use and self-study, and include interactive online workbooks, online audio for free download, or audio CDs to enhance the student’s pronunciation. Another growing series is the Dictionary & Phrasebook line, which features essential vocabulary and phrases for travelers in 82 languages including the forthcoming Lingala and Kinyarwanda editions (both are langauges of Africa).

Hippocrene has boasted a strong Polish-interest publishing program for many years, and began by publishing a new translation of Quo Vadis, Henryk Sienkiewicz’s Nobel Prize-winning novel. (A translation by W. S. Kuniczak was also published by Hippocrene in 1997). New editions of many of Sienkiewicz’s other works were produced, including a highly successful translation of his classic Trilogy. In 2016, Hippocrene published Wearing the Letter P by Sophie Hodorowicz Knab. Blending archival research and survivor accounts, Knab finally gives a voice to the thousands of Polish women who suffered years of forced labor and other atrocities during World War II.

A Polish-interest title was also behind the launching of Hippocrene’s cookbook series: Best of Polish Cooking, by Karen West (1983). It was wildly popular, which led to perennial favorites The Polish Country Kitchen: Expanded Edition and Polish Holiday Cookery. Hippocrene then began a rapidly expanding line of ethnic cookbooks featuring cuisines from Europe, Asia (Healthful Indian Flavors with Alamelu), the Americas (Secrets of Colombian Cooking), as well as cuisines influenced by migration, such as Muy Bueno: Three Generations of Mexican Flavor. Today, Hippocrene Books features 80 cuisines in its cookbook program.

Hippocrene Books owes its current success to an integrated publishing program. As the company continues to evolve, it will continue to develop the internationally-oriented content that has defined it from the beginning.