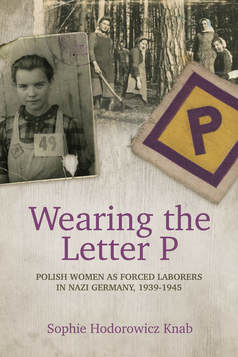 We are pleased to announce Wearing the Letter P: Polish Women as Forced Laborers has been recognized as a finalist in the annual Foreword Reviews’ INDIES Book of the Year Awards in the History category! View the press release here.

Each year, Foreword Reviews shines a light on a select group of indie publishers, university presses, and self-published authors whose work stands out from the crowd. In the next three months, a panel of more than 100 volunteer librarians and booksellers will determine the winners in 63 categories based on their experience with readers and patrons.

An unflinching, detailed portrait of a forgotten group of Nazi forced labor survivors.

Written by the daughter of Polish forced laborers, Wearing the Letter P gives a voice to women who were taken from their homes as young as 12 years old and subjected to slave labor conditions, starvation, sexual exploitation, and forced abortions and child separation--all while Nazi propaganda depicted them as well-cared-for volunteers. Knab provides an important contribution to World War II history, based on archival records from the U.S. and Europe, family records, war crime trials, and previously unpublished victim accounts.
SHOP HISTORY