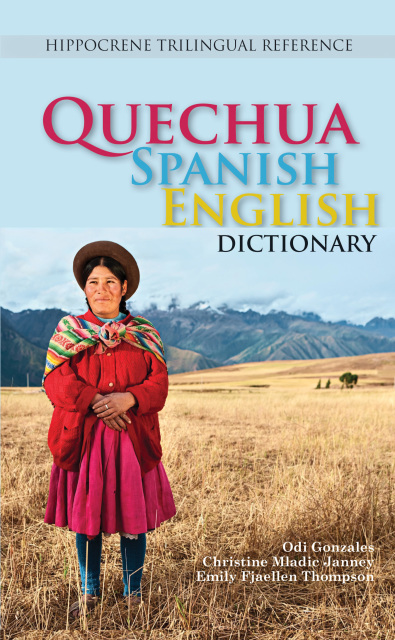 Quechua is an indigenous language family spoken by nearly 10 million people, primarily in the Andes region of South America. It is best known as the language of the ancient Inca empire. Alongside Spanish, Quechua is an official language in Bolivia, Ecuador and Peru. This full-length dictionary was researched and compiled to address the paucity of written Quechua resources and includes 3 sections: English-Quechua, Spanish-Quechua, and Quechua-Spanish-English.

Spanish is a logical conduit language between Quechua and English and many Quechua words are found in Peruvian Spanish. Ideal for anthropologists, students and travelers, this dictionary features over 11,000 entries as well as an introduction to the Quechua language and basics of grammar.

Buy the book from these sellers:

Odi Gonzales is a native Quechua speaker, researcher, translator and poet. He has published several scholarly books in the field of Latin American literature, and many multilingual collections of poetry. He has led the Quechua language program at New York University since 2008. He currently lives in New York City and travels frequently to Peru.

Christine Mladic Janney is a PhD candidate in Anthropology at New York University. She received a Fulbright Grant for research in Peru, a Public Humanities Fellowship to develop digital Quechua language resources, and Foreign Language and Area Studies Fellowships to study Quechua in New York and Peru. She currently resides in Brooklyn, New York.

Emily Fjaellen Thompson earned her BA from Vassar College, where she was awarded the Burnam Fellowship and the Cornelisen Fellowship for Language and Cultural Study. She received her MA from New York University, where she was granted Foreign Language and Area Studies Fellowships for Quechua language study in New York and Peru. She currently lives in Oakland, California.