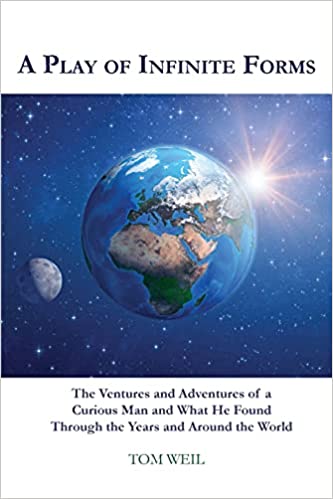 A Play of Infinite Forms

This is a book thousands--millions even--have not been waiting for. Readers who chance to come across this volume may well regard it as did Groucho Marx when blurb-seeking authors sent him their new book: "From the moment I picked it up to the moment I put it down I couldn't stop laughing. Some day I hope to read it."

More discerning readers, however, will find in these pages an insightful and delightful account of what a highly curious man--a provincial but worldly Midwesterner roaming the globe--found over many years as he made his way through life and all around the world. Filled with history, culture and humor, this travel reminiscence includes choice selections of what the author observed, learned and thought about the world and life as he happened to experience them.

In his late-in-life account, Weil offers the wisdom of his mature years--all too few, alas, compared to his many immature years. But better late than never, so he hopes even if some particularly demanding readers may say better never than late.

A PLAY OF INFINITE FORMS offers a light-hearted view of the odd experience and experiment of being alive. Always lively and entertaining and at times eccentric, the narrative is literate but not literary, intelligent but not drily intellectual. The book presents a sparkling and charming overview of an eventful travel life--a tour de force account of the author's adventure-filled tour de monde.

The reminiscence describes some of the most noteworthy places Weil saw, memorable people he met (famous and little-known), his experiences and impressions about travel and life as he encountered the infinite forms which by chance came to comprise his earthly existence. These pages offer a rich mix selected from a lifetime of travel, reading and events and from the author's contemplations about the unlikely phenomenon of briefly existing as an earthling among the world's ceaseless play of infinite forms.

Veteran Hippocrene author Tom Weil now reverts to type by writing yet another book to add to the earthly play of infinite forms. Hippocrene also published his LAST AT THE FAIR (1986), a book of travel essays which won a National Endowment of the Arts writing fellowship grant, and

THE MISSISSIPPI RIVER (l992) for which he won the Donald T. Wright Award for best book on a

maritime topic. In 1993 he won an Author Recognition Award "for Outstanding Contributions

to Missouri Literature." Weil is the author of two adventure novels, and his travel articles have appeared in newspapers coast to coast, from The New York Times to the Los Angeles Times and in such other papers s the Chicago Tribune, the Kansas City Star, the Des Moines Register, the Memphis Commercial Appeal and the Atlanta Journal. For l3 years he wrote the popular "Roaming With Weil" travel column for the St. Louis Post-Dispatch.